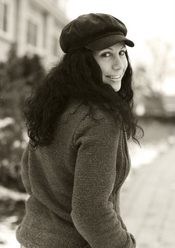 As a child, Natale Ghent and her family moved to Canada from the United States. Since then she has been enjoying the land, wilderness and  vibrant cities that make up this beautiful country. Natale has been writing all her life and as an adult has penned seven books. In 2009 Natale's book The Odds Get Even hit store shelves. The sequel to this book will be out this Spring! Here's some information about the book:

(Harper Trophy Canada / May 17 2011)
It’s time for revenge! Boney, Itchy and Squeak are the Odd Fellows, self-professed geeks and the best of friends. They hang out in their treehouse, a refuge from their mortal enemy, Larry Harry, AKA, The Fart King. But the Odds have had enough. They’re going to end Larry’s reign of terror, and they’re going to use their knowledge of science and the local legend of the haunted mill to do so — if they don’t get tangled up in their own schemes first!

Natale has a wild imagination that truly speaks volumes about her inner child so when we asked her to discuss one of her favourites she decided on her first "book crush". Check out what she had to say and then enter to win a copy of The Odds Get Even so that you are ready for the second book!.. .
**********
The First Cut is the Deepest: True confessions about my favourite childhood books

I had a feral imagination as a child. I was always drawing and writing and daydreaming. One of the things I loved imagining was spaceflight. Not organized and official NASA kind of stuff: The DIY kind available only to children and a select group of loosely- hinged grownups. Spaceships and strange new worlds populated my waking and sleeping realities, and in every experience I was always in control, manning my own little personalized ship in a kid-centric universe.

My first big chapter-book crush was Eleanor Cameron’s The Wonderful Flight to the Mushroom Planet. In the novel, two kids answer a newspaper ad placed by a mysterious little man named Mr. Bass. The man prompts the children to build a spaceship, choose a mascot, and rocket off on their own to save an alien planet, which they successfully do. I could hardly contain myself! I went around like the Ancient Mariner, telling anyone who would listen that I’d discovered the best book of all time.
Until my older sister read it.
“It shouldn’t have been real,” she said. “It should have been a dream.”
How my balloon deflated that day! I quietly abandoned Cameron and turned to Mageurite Henry, burying myself in horse stories. It wasn’t a difficult transition; I was in love with all things equine. My sisters and I grew up on horseback. I cherished every word of Henry’s books, especially Misty of Chincoteague, King of the Wind, Sea Star, Orphan of Chincoteague and Stormy, Misty’s Foal. But secretly, I never really got over my first big crush.
Today, my sister and I joke about our differences. She’s happiest with her feet planted firmly on the ground of her farm. I love animals of all kinds — especially horses. But I’ve also got some spaceships to build and planets to save!
-Natale