Review: THE DARKEST NIGHT (Lords of the Underworld #1) 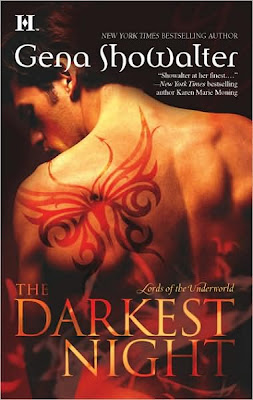 All her life, Ashlyn Darrow has been tormented by voices from the past. To end the nightmare, she has come to Budapest seeking help from men rumored to have supernatural abilities, not knowing she'll be swept into the arms of Maddox, their most dangerous member -- a man trapp ed in a hell of his own.

Neither can resist the instant hunger than calms their torments . . . and ignites an irresistible passion. But every heated touch and burning kiss will edge them closer to destruction -- and a soul-shattering test of love . . .

The Darkest Night is the first book in Gena Showalter’s Lords of the Underworld Series. I have recently just finished reading Kresley Cole’s Immortals After Dark series, and it is through her and her fan base that I was introduced to Gena Showalter - I’ve been apparently living under a rock.

The first book sets up a lot in terms of characters, plot, and mythology surrounding these fascinating male characters. This first book focuses on Maddox or Violence as he is often referred to as by his fellow underworld Lords. Maddox and his immortal friends were angry with the gods and in response -for them appointing Pandora the guardian of what we know as Pandora’s Box- they lashed out and attacked Pandora. The outcome was deadly; literally. All of the men and one female immortal present during the attack, opened the box and let out the demons contained inside. Not only are these demons so evil that the gods themselves were afraid of them, but they attach themselves to the men and woman immortals, making them Lords of the Underworld.

In this story we follow Maddox as he tries to control the demon inside of him, and Ashyln, a young female who has the ability to hear past conversations. Their love story is unique and I really enjoyed both Maddox and Ashlyn in their quests to not only contain their own secrets, but to make sense of the new feelings taking over their minds and souls.

I can see some people not particularly liking Ashlyn or seeing themselves connect with her. I, on the other hand, absolutely loved her fearlessness and ability to love beyond mere mortal things. Her love is something we all crave to have and crave to give. The love between Maddox and Ashlyn is not without its faults and problems, but it is a love that gives off the transcend through time vibe.

As a lover of Greek mythology, I was ecstatic to read a series where the main characters are immortals from legend. The story line is absolutely fascinating and I’m glad that the characters we are to see throughout the series are all established within this first book. By Gena doing this, she has allowed her readers to better familiarize themselves with the male characters and feel more a part of their world.


I would suggest this read and tell you to quickly purchase all of the other books in the series. Trust me! Once you read The Darkest Night, you will be begging for more.