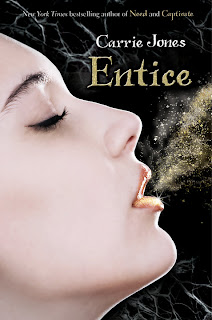 Zara and Nick are soul mates, meant to be together forever.
But that's not quite how things have worked out.
For starters, well, Nick is dead.
Supposedly, he's been taken to a mythic place for warriors known as Valhalla, so Zara and her friends might be able to get him back. But it's taking time, and meanwhile a group of evil pixies is devastating Bedford, with more teens going missing every day. An all-out war seems imminent, and the good guys need all the warriors they can find. But how to get to Valhalla?
And even if Zara and her friends discover the way, there's that other small problem: Zara's been pixie kissed. When she finds Nick, will he even want to go with her? Especially since she hasn't just turned...she's Astley's queen.
**********
Pixies, Weres and the creepy town of Maine; Carrie Jones has packed them all into the pages of the Need series. Entice, the third book in the series, picks up exactly where Captivate left off and throws the reader into the action. With Nick in Valhalla, and Zara as a Pixie Queen, there are an abundance of changes on the horizon for everyone. When you throw Astley into that mix it all kind of gets a little crazy.
In the previous books, clever chapter titles were used that all related back to the same theme. In the first book they were phobias, and in the second they were Pixie Rules. Jones continues with this in Entice by using social media and news quotes to title each and every chapter. With so much going on within Zara's social circle there is little time to step out and take a look at what life is like for others in Maine. The quotes at the beginning of each chapter aim to give background on the state of the small town and the people living within its boundaries.
Another aspect of Entice that aligns with the rest of the series is Zara's struggle with herself. As a pacifist, Zara is challenged by all of the violence around her and is tempted by her need to seek revenge. While Jones never compromises Zara's character, she definitely finds ways to test her. Zara is not the only one who fears the Pixie Queen she has become; it is also difficult for those closest to her to really understand and accept her. There are many moments in the book where Astley just might be the only one who knows and accepts Zara as she is.
I will not hide the fact that I am Team Astley. There is just something so charming and chivalrous about him that cannot be denied. The reason that Entice is not my favourite book in the series has a lot to with Astley. The entire time I was reading the book I kept thinking, "You're the Jacob Black of this book". Who knows if I'm right, but it is possible that Zara and Nick will end up together and Astley will fade into the shadows. It is this outcome that makes me weary about the end of this series.
Overall Entice offers much of what has been expected with this series and is a good YA read. I am very excited to see where the final book takes the characters and exactly who Zara ends up with. All I can say is that Astley has my vote.
-Christie
Posted by Book Junkies at 8:00 AM