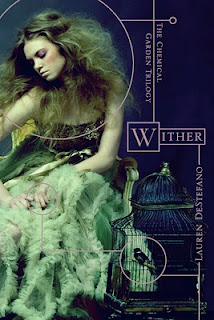 
Thanks to modern science, every human being has become a ticking genetic time bomb—males only live to age twenty-five, and females only live to age twenty. In this bleak landscape, young girls are kidnapped and forced into polygamous marriages to keep the population from dying out.
When sixteen-year-old Rhine Ellery is taken by the Gatherers to become a bride, she enters a world of wealth and privilege. Despite her husband Linden's genuine love for her, and a tenuous trust among her sister wives, Rhine has one purpose: to escape—to find her twin brother and go home.
But Rhine has more to contend with than losing her freedom. Linden's eccentric father is bent on finding an antidote to the genetic virus that is getting closer to taking his son, even if it means collecting corpses in order to test his experiments. With the help of Gabriel, a servant Rhine is growing dangerously attracted to, Rhine attempts to break free, in the limited time she has left.
**********
Wither is an exquisite debut Dystopian novel for first time novelist Lauren DeStefano.
I always find it rather hard to write a review on a novel that I absoultely loved in every possible way. I've had this novel finished since late January and have struggled immensely to find the words that could possibly do this book justice.
I was completely blown away with not only Lauren DeStefano's writing, but this beautifully Gothic and complex world of the future that she created. The novel follows Rhine, who is part of the new generation –– the generation born after medicine and science perfected the first generations genes so they would no longer die of illness and disease. The whole idea of the human race FINALLY finding cures to AIDS, cancer, the flu –– anything that humans are plagued with –– only to have their children die at a beyond early age is an astonishing concept. What would happen if modern medicine could cure the illnesses that ail us now, without knowing the side effects this medication would have in the future...for our children? Would we take it, or take what fate has to offer?
Following Rhine on her journey is simply heartbreaking. She is forced into a life of polygamy with two other girls, one older and one younger, who become her sister wives. These girls along with Rhine serve one purpose, to try and create more offspring so the human population does not die out.
The characterization of the characters has been done beautifully. My favourite character in the novel is Linden. My heart broke for him. I can see him either being a character loved or misunderstood. You feel his sadness, his optimism, his complete and udder disillusion of the world. When your entire world has been created for you in the confines of your own home, what would you believe to be real?
Linden's father is a terrifying character and not for one moment did I find myself feeling sorry for him or maybe feeling I was misunderstanding his intentions. He is an evil man and that is conveyed strongly within the writing. Rhine is also complex and tragic. What I loved most about her character is how she is never willing to fully commit herself to the thought of possibly never living her own life again. She keeps that idea in her head and in her heart, never giving up hope.
If you only had a short time left to live, would you live the life someone has set up for you–– creating another life that will share the same fate as yourself? Or would you take your own fate into your own hands and live those remaining years filled with love, friendship, and family? That is what Rhine must decide throughout the course of the novel.
From the idea of the novel, to the writing, details of the derelict and broken down cities, to the paradise created at Linden's home, DeStefano has created a world that is so complicated and sad that it creates a beauty all on its own.
Wither exceeded all expectations that I had and I would highly recommend it to anyone and everyone. If you have a passion for words and reading, this is a must read book.

**********
*A special thank you to Beth at Simon & Schuster Canada for providing me with this book for review.