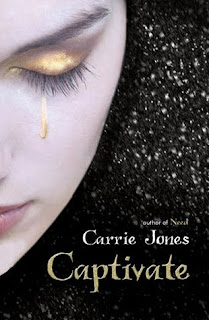 Zara and her friends knew they hadn't solved the pixie problem for good. Far from it. The king's needs grow deeper every day he's stuck in captivity, while his control over his people gets weaker. It's made him vulnerable. And now there's a new king in town.

A turf war is imminent, since the new pixie king, Astley, is moving in quickly. Nick nearly killed him in the woods on day one, but Zara came to his rescue. Astley swears that he and Zara are destined to be together, that he's one of the good guys. Nick isn't buying it, though Zara isn't as sure -- despite herself, she wants to trust the new king. But it's a lot more than her relationship with Nick that is at stake. It's her life -- and his.

*****
If you have not guessed I am slightly addicted to Carrie Jones' Need series. So much so that I went out here in Sydney to buy the second book, Captivate despite the ridiculous cost of books. In Captivate, the approach taken with each chapter is different than it was in the first. Instead of using phobias as titles, each chapter offers the readers a Pixie Tip. Like the phobias though the reason for this is not random; the main character Zara and her friends are putting together a book of these tips. In case you were wondering, my Pixie Tip is as follows: Stay away from the Pixie named Astley. He's MINE...
Captivate begins around the same point that Need left off. Zara and her friends have forced all of the pixies into the house in the woods by boarding up the windows and doors with iron (FYI: Pixies + Iron = Pain). Even though the pixies in Bedford have been captured does not mean that the threat has vanished. New pixies are migrating to the town after hearing the news that the current pixie king in the area is no longer in control. Of the new pixies in town though there is only one threatening to win Zara's heart. I thought I would be Team Nick forever. I did. But when Astley came onto the scene I slowly changed my mind. From what I know about Astley I can say that he is a hopeless romantic and that he genuinely cares about Zara's well being. What I like most about him is that from the start he has treated Zara with respect, which is more than I can say for the other man in her life. Nick's temper, and blatant bigotry, are flaws that are challenging for me to overlook. By no means am I saying that Astley is perfect, because I know he has flaws as well, but what I am saying though is that Astley's flaws do not belittle Zara as a person.
At the end of the first book, Zara was struggling with her own identity. As a peaceful person it was difficult for Zara to trap the pixies and to then justify it. In Captivate, Zara must put her internal moral dilemma aside to do what is best for the ones she loves. This does not mean that all of her concerns have disappeared and are no longer an issue. Zara still struggles with a fear of herself and of who/what she will become. It is this fear that seems to be an overarching theme in the series and what truly pulls everything together.
My frustration with this book, and the reason I rated it as I have, stems from the dialogue. The repetitive nature of the vocabulary was an unfortunate part of the first half of the book and something that I was frustrated with. In particular, Nick`s use of the word "baby" nearly drove me up the wall. I understand that this was his way of being affectionate with Zara, and it might have been purposeful on Carrie Jones' part, but either way it was too much for me. To be honest, this repetition was part of the reason that I was driven into Astley's arms so maybe I should not be complaining. I honestly do enjoy this series though and believe that the action keeps getting better and better. My hope is that the third book, Entice, will improve upon the issues of the previous books and will be better all around.