Review: MY SOUL TO SAVE 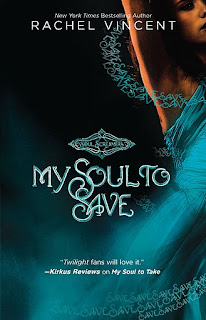 Author: Rachel Vincent
Hardcover: 279 pages
Publisher:Harlequin Teen
Published: January 1, 2010
Rating: 4 of 5
The last thing Kaylee needs right now is to be skipping school, breaking her dad’s ironclad curfew and putting her boyfriend’s loyalty to the test.  But starry-eyed teens are trading their souls for a flickering lifetime of fame and fortune in exchange for eternity in the Netherworld—a consequence they can’t possibly understand.  Kaylee can’t let that happen, even if trying to save their souls means putting her own at risk...


Less than two weeks ago I started and finished the first book in this series, My Soul to Take. I enjoyed it very much so I was glad that I splurged on the second and third books in the series. My Soul to Save picks up roughly where My Soul to Take ended. Kaylee, now aware of her bean sidhe (banshee) powers, is back to saving souls but this time as a favour to Tod the Reaper. The one soul in particular that Kaylee needs to help save is that of Addison Page, Tod's celebrified ex-girlfriend. The apple of Tod's eye sold her soul for fame and fortune along with many other teen stars and now needs help breaking her contract.


Due to the soul at stake, readers will get to spend more time with Tod than they did in the first book. Tod is incredibly hilarious and had me in stitches with a couple of his one liners. I will say though that Tod's presence in the book is kind of bittersweet. The bitter part would be when Kaylee and Nash, all tangled up in each other, are interrupted by Tod. His timing is an issue, but otherwise I adore him. The way that he feels for Addision, coupled with his determination to save her soul, showcases a softer side to a guy with a strange day job.


Speaking of Kaylee and Nash all tangled up together, it is no secret they are still going strong. The affection that they have for one another is something Rachel Vincent writes beautifully. From the words that they use with each other to the comfort they find in each others arms, it is all deeply passionate. Vincent also writes her characters quite well and I have found that they have multiple layers. Nash, for example, is someone who you would expect to be confident all of the time but this is not true at all. Readers can see this in the way he fidgets when he is stressed, or how he shies away from some aspects of soul saving.

The action in My Soul to Save flows in the same way as it did in My Soul to Take. The beginning and the end of the book are both action packed, while the middle is slower paced. When it comes down to the final chapters of the book the Netherworld becomes an integral part of the story. Vincent's imagination runs wild here as she creates many creatures that will make your skin crawl.  It would be nice to see the Netherworld creatures come out again in the next book so that they can wreak more havoc.

Overall I found this book to be quite enjoyable and it strengthened what My Soul to Take had  previoulsy built. My Soul to Keep is next and from what I have heard it might just be my favourite! I hope you will all consider this series when you are searching for something new to read.