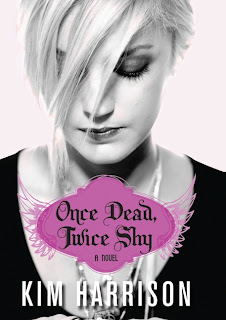 Rating: 3.5/5
Everyone does it. Dies, I mean. I found this out for myself on my seventeenth birthday—which also happened to be the night of my prom–when I was killed in a car accident. It was a carefully planned scything, just a small moment in the battle between light reapers and dark, heaven and hell, choice and fate.


There is something intriguing about an adult fiction author who decides to make their debut in the world of young adult novels. Kim Harrison is one such  individual and her first young adult novel is a success. Once Dead, Twice Shy puts a spin on everything you thought you knew about life and death. It is the story of Madison Avery who is not only very unique but very dead. Killed on the night of her prom, Madison is lingering on earth after stealing a very powerful amulet from, Kairos, the reaper who took her life. With only the appearance of a real body Madison is attempting to get through the social challenges of high school while trying to learn from Barnabas, the reaper who has been assigned to her.
The world of Once Dead, Twice Shy brings together light reapers, dark reapers, timekeepers and guardians, and throws in an undead teenager. Madison is a unique character; kind of like a bad girl trapped in a good girl's body. She is a purple hair dying, skull earring wearing, teenage girl who sneaks out at night and just happens to be dead. As for the guys you ask? Well there are two, and they are nothing alike. Josh is human, popular, and has this sweet side that is oh so irresistible. And then there's Barnabas. There is something so appealing about Barnabas and his standoffish nature. I am hoping that we get to see a ferocious love triangle form in the next book just so that Barnabas and Madison have a chance!
The dynamic in the book that appealed to me the most is between Madison, Josh and Madison's guardian angel, Grace. After Barnabas takes off with his boss, Ron, it is up to Grace to watch over Madison and make sure she stays safe. Grace is a comical character that you just cannot help but enjoy. Her witty rhyming remarks will make you want to scream in annoyance but then have a good laugh. The relationship that
Grace and Madison have is something special, and the way these two talk around Josh is humorous to say the least. Overall, the trouble that these three characters stumble upon is quite entertaining and action packed as well.
While I enjoyed many things in this book it in some ways left me in a similar position as Lauren Kate's Fallen did. There were many unanswered questions at the end of the book which can be a good thing, but in this case did not seem to deliver. As well the pace of the book is at times quite slow when it does not seem necessary. With that said, the book is still a good read and I can only imagine that the sequel, Early to Death, Early to Rise, will only build on what was established previously. While this is my first time with anything written by Kim Harrison, it is not surprising to me that she has been successful with her adult fiction. She seems to give readers a little bit of everything that one might want from a book. I hope that by reading the sequel to this book that I will be better able to understand Harrison's writing style and to appreciate it even more.
-Christie
Posted by Book Junkies at 10:26 PM