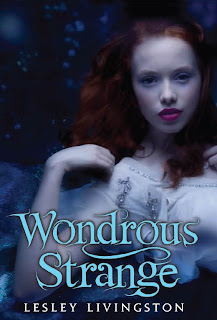 Kelley Winslow is living her dream. Seventeen years old, she has moved to New York City and started work with a theatre company. Sure, she's only an understudy for the Avalon Players, a third-tier repertory company so far off-Broadway it might as well be in Hoboken, but things are looking up-the lead has broken her ankle and Kelley's about to step into the role of Titania the Faerie Queen in Shakespeare's A Midsummer Night's Dream. But Faeries are far more real than Kelley thinks, and a chance encounter in Central Park with a handsome young man named Sonny Flannery plunges her into an adventure she could never have imagined. Sonny and Kelley find themselves drawn to each other-and into a terrible plot that could spell disaster for both New York and the Faerie realm alike
Reading Wondrous Strange by Lesley Livingston was my first Faerie reading experience in a novel. I love the paranormal, but for some reason I’ve never found myself gravitate towards books which are based around Faerie lore/myth. I’m extremely happy however that I decided to go for it and read this book.

I’ve been trying to make it a priority in reading certain YA novels. Since I’ve been voting for the Teen Read Awards, I didn’t want to go in and vote for only the books I’ve read. I planned on giving every author a fair chance. Since Darklight is nominated, it only made sense that I read Wondrous Strange first.
The book was extremely interesting- I found- since it included Shakespeare quite frequently as the novel progressed. Kelley, the main character in the novel, is an aspiring actress, who at 17 has moved to New York in order to follow her dreams. When the novel starts, Kelley is handed over the role as Titania- the faery Queen. As merely an understudy, this is Kelley’s dream come true, except she manages to mess up all of her lines the moment she steps on stage for rehearsal. I absolutely love Shakespeare and A Midsummer Night’s Dream is my favourite play, which perhaps made me a bit bias going in.
While attempting to learn her lines and not mess up, Kelley meets the strangely alluring, handsome and perhaps a little bit stalkerish, Sonny Flannery. With dark hair, silver grey eyes and old school charm, how can one not find him completely heart melting and yummy? I don’t know about you, but if I knew a guy who could quote Shakespeare with ease, I think I’d melt a little. Sonny finds himself drawn to Kelley but he is not sure why. She is a mortal, and although he is as well, they live in two completely different worlds and their definition of normal differs drastically.
I actually really enjoyed the character of Puck/Robin Goodfellow/Bob. He brings in comedic relief to a story which takes on a pretty serious tone right from the beginning. You learn of infant abduction, the serious role in which the changelings play in protecting the faerie King and land, striving to live out your dream as you find out a secret that could change your life forever.
The friendly banter between Maddox and Sonny was also quite enjoyable. Then we have the love story. Romance between characters isn’t a new thing, since it can be found in almost every novel you read. What I liked about this one is that there is no triangle. There are other forces at work that the main characters will have to overcome in Darklight, but there isn’t a back and forth between 3 people over who loves whom. Who know, this could change and do a complete 360 on me in the second book. But for now, I enjoy the non tripartite relationship.
The novel ends on both a dark and light note which reflects a major plot line in this book. It is also the title of the next which can only mean the dark and light imagery will continue. I’m leaning towards a darker novel and perhaps the light will shine in book 3. The novel was fast paced and it made me want to read the second one right a way.
-Ashley
Posted by Book Junkies at 5:08 PM