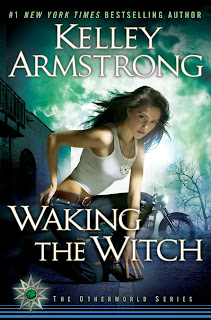 336 Pages, 6.2 x 9.45 x 1.2 in
August 3, 2010
Random House of Canada
03073575979780307357595
List Price: $29.95(CAN), $17.73 (US), $15.76(CAN Book Depository)
Purchase at: Chapters, Amazon, The Book Depository
Rating: 4/5
The orphaned daughter of a sorcerer and a half-demon, Savannah is a terrifyingly powerful young witch who has never been able to resist the chance to throw her magical weight around. But at twenty-one she knows she needs to grow up and prove to her guardians, Paige and Lucas, that she can be a responsible member of their supernatural detective agency. So she jumps at the chance to fly solo, investigating the mysterious deaths of three young women in a nearby factory town, as a favour to one of the agency's associates. At first glance, the murders look garden-variety human, but on closer inspection signs point to otherworldly stakes. Soon Savannah is in over her head. She's run off the road and nearly killed, haunted by a mystery stalker and freaked out when the brother of one of the dead women is murdered when he tries to investigate the crime. To complicate things, something weird is happening to her powers. Pitted against shamans, demons, a voodoo-inflected cult and garden-variety goons, Savannah has to fight to ensure her first case isn't her last. And she also has to ask for help, perhaps the hardest lesson she's ever had to learn.
Waking the Witch marks #11 in Kelley Armstrong’s Women of the Otherworld series. For the first time, the reader is given a book in which Savannah Levine - daughter of Eve Levine and Kristof Cabal- half witch, half sorcerer narrates. It follows in the tradition of the previous otherworld books, where there’s a mystery to be solved and a tough, strong willed woman to do it. I’ve always loved Savannah. Even when she was only a small little thing in Stolen and then again in Dime Store Magic, it was hard not to want to take care of her and want to be her friend- at the same time.
The book opened up a lot of question that the reader isn’t given the answers to, just yet. I’m anticipating great things from Spell Bound in 2011. The book took a bite out of me and didn’t let go until the final pages. The end leaves you wanting more! And trying to guess all the twists and turns that come straight at you, is impossible. I would have never guessed the direction in which the book ended up heading.
The plot was strong, with an even stronger heroine who wants to do things by herself and by her rules. It’s her way or the highway, although she is surrounded by men - being a 6 foot tall, skinny, dark haired witch sorcerer with blue eyes- she doesn’t want their help, even when it’s needed the most.
Savannah’s relationship with Adam has been ongoing since she was 12 years old. She’s loved him since then and nothing has changed. Would you really want it to? I for one wouldn’t and I’m glad her feelings haven’t. I’m sad that Adam isn’t really one for sharing his emotions towards Savannah though. He’s guarded when it comes to Savannah but open to her at the same time. He wants to be with her, I could feel it, but can he?
I’m eagerly anticipating Spell Bound and the continuation of Savannah and Adam’s story. It also never hurts to get small glimpses into my other favourite otherworld women: Jaime, Elena, and Paige.
Kelley Armstrong has done it again. She’s given her readers a fast pace, action packed, page turning heroine tale, that will leave you guessing until the very end.
Kelley Armstrong's Website
-Ashley
Posted by Book Junkies at 5:34 PM