So this morning when I awoke around the hour of 11am I thought it would be a swell idea to make some cupcakes. I had been planning on baking something for awhile now but had been far too busy to even consider attempting something new. I just recently purchased Martha Stewarts Cupcake book which was thankfully 30% at your friendly neighbourhood Wal-Mart. She has some pretty advanced cupcakes in there. Just a little bit too advanced for my skills as a baker. I decided to bake Devil Chocolate Cupcakes.

I'm a sucker for chocolate. Everything else in this world is pretty neutral to me when it comes to my love for food, but chocolate just takes everything to a new level. It's actually ironic that I love chocolate so much, almost as if it fills a void in my life. It's delicious, intoxicating and it always makes me feel so good when I have it. It's the after part that gets me. I'm always left unsatisfied and feeling like crap. Since I'm not one for relationships currently or haven't actually ever experienced one so I guess you can say I have a "relationship" with chocolate and it seems the effects are the same as a they would be if I were in a relationship with a guy. They both are kind of downers.

Anyways, back to my baking. The cupcake itself actually turned out well. Baking cakes from scratch can be tricky and there isn't always a guarantee you will please everyone who eats it. They can be extremely dense and dry at times. This cake however was actually quite moist which was exciting. I was worried because I've had some disasters with baking cakes before, unless that is you use Betty Crocker. Boxed cake mix is always a safe bet. It's pretty hard to mess them up. The down size to the box variety is all the crap they pump into it. Not very body friendly.

My problems arose when I got to the icing. Dear Martha, bitter chocolate should never be used unless it is baked into the cake itself with other spices and sugar. The icing was awful. In order to get something from the pound of chocolate I had to waste, icing sugar and vanilla were added. It saved the icing to a certain degree but I decided to only ice half of the cupcakes. That way I pleased all in my household. 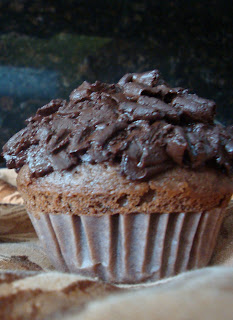 Next I think I will try the Snicker doodle cupcake or the Boston cream. For now I leave you with an image of my creation :)
Posted by Book Junkies at 4:29 PM