This year, we decided to join the 2013 Debut Authors Bash hosted by YAReads! What a fabulous idea - to have bloggers help up and coming authors get their books out there and their voices heard. We were lucky enough to get a chance to interview Carey Corp and Lorie Langdon, co-authors to the new YA novel, Doon. Doon hit shelves is bookstores on August 20th, 2013 so once you read this interview you can rush out and buy it :) Despite outward appearances, Veronica Welling’s life is far from perfect. Her boyfriend is more into her competition, her mom treats her like a meal ticket, and the blond stranger who keeps appearing out of nowhere—well, he’d be darn near perfect, if he were real. After Vee catches her boyfriend cheating, an epic summer in Scotland with her best friend Mackenna Reid seems like the ultimate escape. Neither girl has any clue they’re about to step into a destiny bigger than they could ever imagine.
Through a series of clues left by Kenna’s aunt, Vee and Kenna open a portal and are transported to a thriving kingdom outside of time and place. For Vee, the land of Doon is the fairytale she’s always longed for, complete with the gorgeous blond stranger—who happens to be a flesh and blood prince. But rather than acting like her knight in shining armor, Jamie MacCrae treats her like a leper. Meanwhile, Jamie’s brother Duncan shows obvious interest in Kenna, but she shuts him down, fearing that a “love connection” will prevent her from returning to the modern world.
But the girls’ presence in Doon could break the enchantment that protects the realm. In order to save Doon, the girls must risk everything—life, love, and future—before the kingdom vanishes forever into the mists.
Doon is inspired by the premise of the musical Brigadoon, used with generous permission from the Alan Jay Lerner Estate and the Frederick Loewe Foundation. Follow the journey using the buttons to the right. 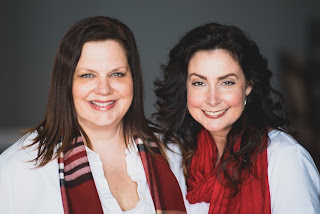 CAREY CORP and LORIE LANGDON came up with the idea for DOON, their debut novel, one fateful winter morning while discussing their love of musicals. Lorie had known since seeing Brigadoon, at age sixteen, that she wanted more of the sleepy kingdom than the original story revealed, while Carey adored the idea of reinventing a mythical world through the eyes of two, vastly different, but inseparable friends—much like themselves. As ideas flew back and forth, suddenly the village that slept for 100 years at a stretch awoke to epic life; and DOON was born. Lorie and Carey live two hours apart, but like Vee and Kenna, they talk and text throughout the day and have often wondered if they share a brain. To find out more visit the Dooniverse at www.DoonSeries.com


Q&A WITH CAREY AND LORIE:

What was it about the musical Brigadoon that inspired you to write this book?

Lorie: The premise is quite magical – a hidden village that only appears to the outside world once every hundred years. But as much as I loved the romance and mystical adventure of the musical, it always bothered me that during the hundred years that the bridge was closed—i.e. the village was hidden—the inhabitants of Brigadoon slept. Really? They slept for a hundred years at a time!? I wanted more. I wanted to peek behind the curtain and see a thriving kingdom filled with vibrant people with unique customs, struggles and triumphs! And that’s exactly what we’ve created in Doon. :D

Is it easier or harder to co-author a book? What are some benefits of this type of writing relationship?
Lorie: As you can imagine, one of the challenges of co-authoring is not having complete creative control, but this can also be an advantage because you have two brains instead of one!

Carey and I, much like our characters, are opposite in a way that makes for a perfect balance. As writers, we each bring different technical strengths to the table.
The actual process of writing with a co-author is fun and dynamic. Splitting responsibilities such as blogging, promotions, and social networking is a great blessing. But the biggest advantage is that you have someone who is equally invested. Someone you can call at midnight with a brilliant plot idea, who won’t curse you out and block your phone number. (Carey: Ha! Lorie is trying to teach me boundaries, but I’m not a very good student.)

Carey: What Lorie said—especially the part about opposites. Lorie LOVES to write bad boys, like her character Jamie. I have a soft spot for the boy-next-door good guys, like my character Duncan.

If Doon was turned into a movie, which castle (anywhere in the world) would be the perfect backdrop?

Carey: Continuing with the opposite theme. Lorie tends to gravitate toward romantic fairytale castles like Burg Eltz Castle in Germany or Neuschwanstein, the Bavarian castle best known as the inspiration for Sleeping Beauty’s castle. That romantic fairytale quality is exactly what she brings to Doon.

No matter how gorgeous a castle is, I need historical accuracy in setting and structure. Urquhart, Stirling, and Edinburgh Castles are all very close for me. However, Castle MacCrae in Doon is inspired by a fantasy drawing that Lorie and I love, so in a perfect world, the movie studio would build a replica of that castle in Scotland. (Note how it is a blend of both our preferences!) 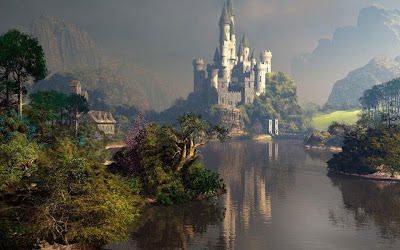 What kind of heroine is Doon’s main character Vee? Will readers be able to relate to her easily?
Lorie: Vee is very relatable. Like so many of us, her childhood has been far from perfect. But Vee refuses to let it make her a victim. Instead, she’s allowed that hardship to make her strong and brave. She has a huge heart and will do anything for the people she loves, including face some of her greatest fears.

The phrase “Destiny Awaits!” seems to accompany this book quite often. What does this mean to you and how is it reflected in Doon? 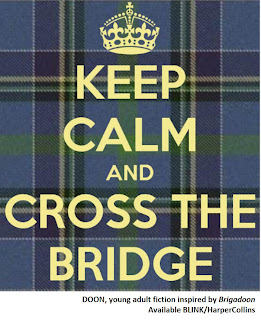 Carey: Most people have a basic understanding of Destiny as the events that will necessarily happen to a particular person or thing in the future. “Destiny Awaits” is about embracing that thing you were meant to do with your life. What I find interesting is that “Crossing the Bridge” has become a metaphor for the being brave enough to embrace your destiny.


We would like to thank Carey Corp and Lorie Langdon for stopping by and hanging out with A&C Book Junkies! We would also like to thank YA Reads for hosting this wonderful bash all month long.

Now for the contest: Leave a comment telling us where you would want to go if you could be transported anywhere in the past. Also don't forget to tell us where you are from and your e-mail address. Winner will receive DOON Swag!

Open to US Residents only. Closes on October 4th at Midnight. Winner will be contacted through e-mail.