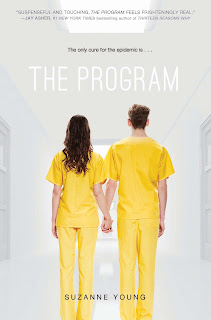 Sloane knows better than to cry in front of anyone. With suicide now an international epidemic, one outburst could land her in The Program, the only proven course of treatment. Sloane’s parents have already lost one child; Sloane knows they’ll do anything to keep her alive. She also knows that everyone who’s been through The Program returns as a blank slate. Because their depression is gone—but so are their memories.Under constant surveillance at home and at school, Sloane puts on a brave face and keeps her feelings buried as deep as she can. The only person Sloane can be herself with is James. He’s promised to keep them both safe and out of treatment, and Sloane knows their love is strong enough to withstand anything. But despite the promises they made to each other, it’s getting harder to hide the truth. They are both growing weaker. Depression is setting in. And The Program is coming for them.

It's not everyday that a young adult author tackles the sensitive subject of teenage suicides, but Suzanne Young brings the issue to the forefront in her dystopian thriller, The Program.  Based in a society where suicide is an epidemic, Young's heroine Sloane  is trying to avoid getting flagged for depression and placed in The Program. This novel, although a work of science fiction, provoked a real and relevant debate inside me: Is it better to be numb, or to risk feeling everything? Doctors in the 21st century seem to medicate young people more and more when they display depressed or anxious tendencies, but is it right? Young really took this idea to the next level in this book, but there are real roots to the questions she proposes.

From start to finish The Program had me on edge. It made me mad, sad, happy and fearful. The way that the story is told is quite unique and really had an emotional impact. Sloane's memories are kept close through the beginning of the book, but soon start to unravel as she loses control. As her stories are revealed, we the audience become the ones with the power. Our knowledge of Sloane's life becomes greater than her own as she begins to lose herself and questions everything around her. It is hard to not want to scream out the truth and just hope that Sloane can hear you.

Sloane was for me the kind of heroine that I could relate to easily; she was grounded, passionate and sweet. Despite all of this, I found myself wanting more from Sloane. There were moments that she could have proved her strength, where she could have risen above her reality and fought, but she didn't.  By no means did I dislike her character, I guess I just wanted to see the side of her that I knew existed deep within. What I am looking forward to most in the sequel to this book is to see Sloane push herself, and to know that she is ready to fight for what she wants.

One of the best parts of this book is the strong relationships that Sloane builds. Watching those around her commit suicide, or be forced into The Program, really left this need in Sloane to hold onto the present. Her connection with James in particular really resonated with me. It made me scared to forget the precious moments I have with loved ones, and kept me wondering if what is meant to be will always be. In many ways this book is full of loss, but it appears in so many different ways. I suppose this was the cause of an almost enjoyable heartbreak for me.

The Program is a very neat concept for a young adult novel, and it immediately captured my attention. There were definitely pieces of Sloane's story that shocked me, and ones that kept me flipping through the pages. The end of this book just thrilled me though because it left puzzle pieces scattered everywhere, and no time to put them back together. A true cliffhanger. If you like other young adult dystopian books, and are looking for a fast paced read, then I hope The Program finds its way onto your bookshelf.