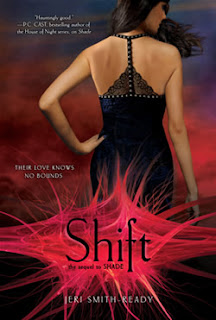 A&C: Shade was one of those books that we forced into the hands of our friends of family because it was just that damn good. With Shift here now we are ready for another round of "We can't talk to you until you read this book". We are ecstatic to be a part of the Shift blog tour (Thanks Jeri and Karen!), but even more so we are all smiles that we are the last stop AND we get a playlist. :) Lucky Junkies. Before you read the post, here is a message from the brilliant mind behind this series, Jeri Smith-Ready...


Thanks to Christie and Ashley for hosting the grand finale of the SHIFT blog tour!  After the post, check out your chance to win books and a special prize.
**********
I thought it appropriate that since we started the tour with a playlist, that we should end with one, too. Music is such an integral part of the way that both I and readers relate to the SHADE books, I thought this would make a fitting way to sign off.
No, actually—this was a total accident. I didn’t realize they were bookending the tour until just now (Sunday). Haha!
Anyway, as you probably know, I like to make official “soundtracks” for my books. This started in 2008 with WICKED GAME, when my publisher asked me to include a list in the front of the book of all the songs mentioned in the story. With the release of SHADE last year, those simple “playlists” evolved into full soundtracks, where I would add songs that weren’t named in the book but where certain scenes or characters deserved them.
Even though I’ve had the SHIFT soundtrack ready for a couple weeks, I wanted to wait until the end of the tour to give people time to read the book first so they would know what I was talking about. But don’t worry if you haven’t read it yet—no spoilers here!

This playlist is available—with the studio version of “Another Man’s Woman”—for purchase from iTunes’s iMix site: http://c.itunes.apple.com/us/imix/shift-soundtrack/id436704595. Note: I make no money off the sales of my iMixes—I just like to spread the word about bands I love.

I realize that Coldplay’s “Til Kingdom Come” appeared at the end of the SHADE soundtrack. But Chapter One of SHIFT replays the last few minutes of SHADE with more detail, so I had to start with this song, to reflect the continuous nature of the two books. (Besides, Aura refers to the song on Page One of SHIFT.)


I’ll probably do the same thing in the first chapter of SHINE, overlapping a few minutes with the end of SHIFT. So you can guess which song will be “Ready to Start” the SHINE soundtrack. ;-)


“Your Ghost” by Kristin Hersh was one of the first songs I discovered after deciding to write a ghost story. It inspired many of the mixed emotions I knew Aura would feel after the death and return of her beloved Logan.


Want to hear an amazing story? Okay. I wrote SHIFT a year ago, right? So in one scene, Aura goes to Zachary’s apartment to study. I wanted music in the background, so I had to decide what Zach’s favorite bands were (besides Death Cab for Cutie, declared in SHADE). Radiohead fit his mysterious, cerebral nature, so I wrote this:

Zachary reached past me to set the box on the table, but I didn’t move out of the way. We stood close together, my heart slamming so strong I could barely speak. From somewhere in the living room area to my left, the latest Radiohead release was playing at a low volume. The singer’s haunting murmur made my throat ache.

Now, I had no idea Radiohead would actually have a new release this year, but I figured, hey, it’s a parallel universe, and the band is still together, so it’s believable.


And then this past spring, with zero fanfare, they came out with a new release, THE KING OF LIMBS, with the perfect Aura/Zachary song, “Little By Little.” Serendipity FTW!


“Inside Out” by Eve 6 is my favorite song ever. When Aura and Logan were little kids, they and their friends would dance around to it and sing into fake microphones. Which makes me feel really, really old. But I loved naming a fictional band after a lyric from one of their songs. (No, I don’t know when I’ll get a Tabloid Decoys logo made.)


The first time I heard “When You Say Nothing At All” by Alison Krauss—in the PetSmart parking lot—I knew it was the perfect slow-dance song for Prom Night, specifically, Aura’s one moment of pure happiness during the whole event.


In an early draft of SHIFT, Green Day’s “Jesus of Suburbia” was the climactic song performed at the solstice concert, but one of my beta readers suggested Logan sing one of his own songs. While I never did write lyrics for the song “Shade” (I am not a songwriter, so they would’ve sucked), I gave it the operatic feel and rhythm of “Jesus of Suburbia.” So listening to it will let you imagine how the song “Shade” sounds.


Lastly, “Ready to Start” says it all, with both words and music. Listen to it after you’ve read SHIFT and tell me, am I right or am I right?


Thanks again to the Book Junkies—and to every single blogger on the tour—for not only putting up with my ramblings but posting them to your wonderful sites! I’ll have a special wrap-up message tomorrow when Karen at For What It’s Worth announces the Grand Prize Giveaway. Yay!

**********
If you’ve read SHIFT already, which other tunes from this soundtrack do you think go with a certain scene or character? (Try not to make your guesses be overly spoilery.) If you haven’t read SHIFT but have read SHADE, can you guess which songs might fit Aura, Logan, Zachary, or one of the other characters? If you haven’t read either book, which of these songs would belong on your life’s soundtrack? Feel free to answer just by reading the titles—you don’t need to listen to the songs or look up the lyrics.

SPECIAL CALLBACK, REDEMPTION, CLOSE-THE-CIRCLE QUESTION: Two weeks ago on the blog tour’s first stop, I asked what people thought of Logan. Many commenters thought he was a brat and wanted to slap him. So my question, for those who’ve read SHIFT, do you feel differently about him now?

Answer one or more of these questions, or ask Jeri your own question, below to enter today’s drawing!

There will be two winners.

1) a signed copy of SHIFT, plus the SHIFT soundtrack on iTunes, courtesy of Jeri. Note: due to iTunes’s rules, the playlist may only be gifted within the US. The signed copy is open to all.

2) Winner #2 gets an unsigned copy of SHIFT, courtesy of Jeri’s publisher.

ADDITIONALLY, ALL COMMENTERS WILL BE ENTERED TO WIN THE GRAND PRIZE! - annotated copies of SHADE and SHIFT, an early copy of SHINE (book three of the series, of which there will be no other ARCS) and an iPod Shuffle!

Open to international entries. Winners will be drawn after 24 hours.

Author Bio: Jeri Smith-Ready’s latest release is SHIFT (May 3), the second in the YA ghost trilogy that began last year with SHADE (now out in paperback). She loves to hear from readers, so please visit her at www.jerismithready.com, or better yet, on Facebook (www.facebook.com/jerismithready) or Twitter (@jsmithready), where she spends far too much time.
Posted by Book Junkies at 9:05 AM

New comments are not allowed.