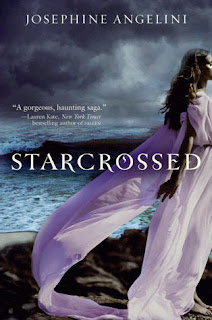 How do you defy destiny?

Helen Hamilton has spent her entire sixteen years trying to hide how different she is –– no easy task on an island as small and sheltered as Nantucket. And it's getting harder. Nightmares of a desperate desert journey have Helen waking parched, only to find her sheets damaged by dirt and dust. At school she's haunted by hallucinations of three women weeping tears of blood . . . and when Helen first crosses paths with Lucas Delos, she has no way of knowing they're destined to play the leading roles in a tragedy the Fates insist on repeating throughout history.

As Helen unlocks the secrets of her ancestry, she realizes that some myths are more than just legend. But even demigod powers might not be enough to defy the forces that are both drawing her and Lucas together and trying to tear them apart.
**********
I was fortunate to get a chance to read Josephine Angelini’s debut novel Starcrossed before the actual date of publication. I was so thrilled when I received the book that I immediately began reading. Starcrossed is a novel that takes the reader and transports them into a world filled with Greek Mythology. Nothing is at it seems. Everything, at its surface level, is veiled by something more magical and mythical. The story follows Helen Hamilton, a girl who has never really fit into the world she has been apart of her whole life. She always feels out of place, slightly off balance from those around her. The only people in her life who understand Helen’s differences are her father, best friend, Lucas –– the new boy in town who shakes up Helen’s entire existence.
Starcrossed definitely had a Romeo and Juliet feel to it, hence the title Starcrossed. Josephine paints a hauntingly beautiful world in which Greek gods are real and the idea of the ultimate love being held within our grasps, finger tips barely touching. Lucas and Helen make the most perfect pairing. They are both independently strongly written characters who can hold their own, but together they turn into a tour de force. The sexual tension between the two jumps off the pages. You can feel their pain, their excitement and their ultimate frustration. Helen was a fantastic female lead! She exudes power, empathy, strength, courage, love, and determination. Even when she is down she doesn’t let her weakness define her. Lucas is her perfect pair. Not only is he super gorgeous, but he has willpower and fortitude that equals Helen.
Not only does Josephine give us two amazing romantic leads in Lucas and Helen, she has also written a superbly exciting and exhilarating supporting cast. It would be amazing to get some short stories or a separate novel altogether, that focuses on some of the supporting characters. They are interesting all on their own and round out the story in epic fashion. All of them bring something very different to the story tying the plot together nicely.
As a debut novel and a novel in general, Josephine Angelini is able to suck you into her world of Nantucket and ancient Greece. This was one of those novels you better make sure you have time to read because once you start you won’t be able to stop. When I put the book down I felt as if a piece of myself, an extension of my person, was missing. I didn’t want it to end. Thankfully this is going to be a series! I can’t contain my excitement. The plot of the novel was intricately woven and pieced together wonderfully. When the first page is able to grab your complete attention, you know the book is going to be just as intense and magical. As a lover of both Greek Mythology and the idea of fate, destiny, and free choice, I ate this book up. I highly recommend this novel for lovers of mythology, magic, the unseen, and love. You don’t even have to be a lover of paranormal fiction to love this novel. You simply need to be a lover of reading and this is the next book you should read!
TRAILER LOVE

Thank you to HarperCollins Canada for this advanced copy. ﻿:) For more information about the book you can visit the HarperCollins Canada website, read their Blog: The Savvy Reader, follow them on Twitter or Browse inside Starcrossed . Happy reading!
Posted by Book Junkies at 6:00 AM