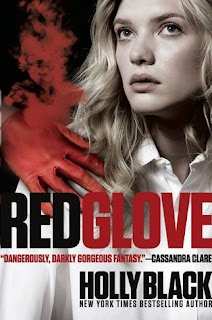 Curses and cons. Magic and the mob. In Cassel Sharpe''s world, they go together. Cassel always thought he was an ordinary guy, until he realized his memories were being manipulated by his brothers. Now he knows the truth-he's the most powerful curse worker around. A touch of his hand can transform anything-or anyone-into something else.
That was how Lila, the girl he loved, became a white cat. Cassel was tricked into thinking he killed her, when actually he tried to save her. Now that she''s human again, he should be overjoyed. Trouble is, Lila''s been cursed to love him, a little gift from his emotion worker mom. And if Lila''s love is as phony as Cassel''s made-up memories, then he can''t believe anything she says or does.

When Cassel''s oldest brother is murdered, the Feds recruit Cassel to help make sense of the only clue-crime-scene images of a woman in red gloves. But the mob is after Cassel too-they know how valuable he could be to them. Cassel is going to have to stay one step ahead of both sides just to survive. But where can he turn when he can''t trust anyone-least of all, himself?
Love is a curse and the con is the only answer in a game too dangerous to lose.

**********
IF YOU HAVEN'T READ WHITE CAT, PLEASE REFRAIN FROM READING THIS REVIEW. IT WILL CONTAIN SPOILERS!
After I finished reading White Cat by Holly Black I immediately jumped into Red Glove. There was no way I was going to be able to leave Cassel and his world of cons alone. Cassandra Clare had it right when she said that Red Glove was "dangerously, darkly gorgeous fantasy." Black did it again with the world of workers and poor Cassal's inability to catch a break.

Red Glove picks up where White Cat left off. Cassel was able to con his brothers, but now Barron won't leave him alone and Phillip can't stand to talk to him. Cassel also finds himself dealing with Lila and his mother working her to love him. You can't help but feel sorry for him, but you know deep down that Cassel will come out victorious. Well, at least as best as a worker can.
The back and forth banter between Cassel and the various supporting characters, was again, amazing! Reading the book was effortless. The dialogue, inner voice, and plot structure fell into place so nicely that you were transported into Cassel's head with ease. You became apart of him, an extension of his soul. Again, the choice of language and phrases was spot on, appealing to both a younger audience as well as an older audience (like me and a great many fellow book bloggers).
I'm also definitely beginning to develop my crush for Cassel into something much more. He screams dangerously sexy bad boy with heart you know is good, but hope deep down inside he never loses his edge.
Then we have our supporting cast of characters, which again, are fantastic. I really love Sam and Daneca. Sam is the best friend you hope you have the chance to have. He's trustworthy, caring, and will be their for you no questions asked. Daneca is in this book a lot more and we really get to see her open up which was great! Then we have the ever so precious mob daughter and love of Cassel's life, Lila. It was nice to see her have to battle with her own emotions and so fragile that you see her core. Don't get me wrong, I love the hard talking, strong, female that Black has created with Lila, but I also like the rawness the reader gets to see in Red Glove. It gives her character dimension and develops the relationship between her and Cassel much more. Cassel's mother is erratic, insane, and totally off the charts, I'm not sure how he turned out to be the only "normal" (because what constitutes what normal is?) one in his family? She definitely adds a level of flare to the story.


The problem I have now is the cliffhanger at the end!! I'm a very impatient person and having to wait is going to hurt, but wait I shall. There is no way I would miss reading Black Heart and finishing the journey with Cassel. Also, there is another Jace moment - hilarious! - that you won't want to miss pop up in this installment of the Curse Workers, for all of those TMI fans out there.