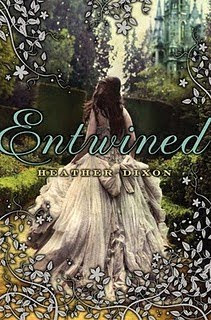 Azalea is trapped. Just when she should feel that everything is before her . . . beautiful gowns, dashing suitors, balls filled with dancing . . . it's taken away. All of it.

The Keeper understands. He's trapped, too, held for centuries within the walls of the palace. And so he extends an invitation.

Every night, Azalea and her eleven sisters may step through the enchanted passage in their room to dance in his silver forest.

But there is a cost.

The Keeper likes to keep things.

Azalea may not realize how tangled she is in his web until it is too late.
**********
Where to begin with this book? I LOVED it, ADORED it, CRAVED it... to simply state my thoughts on Heather Dixon's debut novel. From the moment the first chapter began, I found myself failing at being successful in the Entwine. I was trapped, with no hope of escaping the tangled web of story telling Dixon was emitting from the page. I didn't want to escape the confines of the entwine. I wanted to stay trapped, in hopes that this story would never end. From what I gathered from Heather Dixon's blog, Entwined is a story that builds off of The 12 Dancing Princesses Fairy Tale.  This fairty tale was written by the Brothers Grimm in 1812. I have a collection of Grimm Fairy Tales, however, this is one I was unfamiliar with. So I google searched it and upon reading a quick blurb on the story I was definitely able to see this fairy tale brought to fruition in a beyond magical way by Dixon.
The story finds us following Azalea, the eldest child in a family of 12 daughters. As the eldest, not only does she find herself responsible for the care of her sisters, she is also bound to be Queen soon and must find a husband to become King. On top of everything, Azalea must overcome a family tragedy, keep things in order and not only find love, but keep dancing.
The dancing imagery is this novel was absolutely breathtaking. You were transported into a ballroom full of happy men and women twirling around in complete rapture. The folds of the dress are easily imagined as Azalea dances with the Keeper, or simply with her sisters. The silver gleamed off of the pages bringing the reader into magic.  There is passion, raw emotion, and intensity that is woven into Dixon's language. As each girl is named after a flower, there is a definite sense of a poetic flowery language. Everything flows effortlessly, which is no easy task, but makes for an iridescent book you can't put down.
Azalea is a girl that I envy to be. She is strong, determined, smart having not only the weight of her family upon her shoulders, but the weight of her kingdom. She takes care of her sisters as a motherly figure, but will she have time to find love with all her worrying? Or has she grown up too fast, trying to escape through a magical maelstrom of dancing? Each sister also brings in a new dimension to the story. Let us also not forget the amazing Mr. Bradford. I fell in love with his character the moment we Azalea meets him. He is utterly handsome but completely disheveled, just as Azalea's sisters tend to be. He also has a heart of gold. It would be shocking if girls didn't fall for Mr. Bradford straightaway. There was a Mr. Darcy demure about him, but less pretentious and pompous.
This story captures the essence of both familial and romantic love. More than anything, I found this to be a book about the importance of family and love; the importance of choice and respect. Near the end of the novel, I was constantly getting the image of the ballroom scene from Labyrinth. The part in the movie where Sarah is being drawn into the elegance of mystery of the dance by Jareth. Instead, Dixon paints Azalea in the Sarah role constantly being drawn in my the allure of the Keeper (Jareth). Minus the look of Jareth which is all wrong for the Keeper, the dance scene is perfect in terms of visualization. I've included a Youtube clip of said scene:

To sum up, Entwined was a novel that will transport its reader into a mystical and magical world of a kingdom where dancing is one of the most important qualities a person can have, and where love has the ability to conquer all. This is an amazing debut novel by Heather Dixon that will capture the readers heart in an entwine of its own, never letting go.


A couple passages I loved:
"His voice reminded Azalea of rich, thick cream, the sort one could add to any recipe to make it taste better."


"She wondered if she would be able to give the soul's courtsy, with all her hear and soul, to anyone [...] Around her, the leaves of the rose bush ivies rustled, then curled and entwined through the lattice. Their buds bloomed into fat, silver blossoms, revealing pearls for middles."