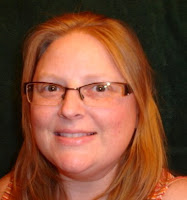 Joanne Levy is not just Canadian, but she lives just a hop, skip and a jump away from us! She works as an executive assistant at one of Canada's biggest banks, but this local author has caught her big break. Joanne's Middle Grade book, Small Medium at Large, will be released by Bloomsbury Kids in the Summer of 2012!
SMALL MEDIUM AT LARGE
Lilah Bloom is just an average twelve year old.  Or she was, until her regular life becomes not-so-regular when she gets hit by lightning and can suddenly hear dead people. Alienating the school's popular girl, helping her dead grandmother find her divorced Dad a new wife and saving the grade eight fashion show were not items on Lilah's seventh grade to-do list, but these are just some of the things she has to deal with now that she’s a medium.  Oy!
What inspired this soon to be published Canadian author to write a book of her own? Well Joanne would have to thank Mr. C.S. Lewis. Check out how this one author shaped her childhood and her love of reading...
**********
A big thanks to Ashley and Christie for asking me to contribute to the Canuck Week Extravaganza! Okay, I made up the extravaganza part, but who doesn’t want to be involved in an Extravaganza?
So. I’ve been asked to talk about my favourite childhood author. I was a voracious reader as a kid, so it seemed like a hard task to single out just one. Determined, I thought long and hard, but in the end, I realized it really wasn’t a hard choice to pick C.S. Lewis. I loved, cherished and worshipped The Chronicles of Narnia books. I read them over and over until each one was dog-eared and falling apart. Eventually, I lost one, and then another, mourning the gaps in the special collector’s box where they should have been. 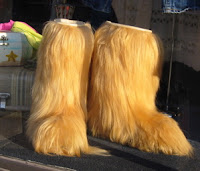 I often dreamed about Aslan and walking alongside him with my hand in his mane, though I wouldn’t have let him go to the stone table without more of a fight. When my friend Barbie got a pair of furry golden-coloured boots, I used to borrow them so I could pretend to be Aslan, padding through the woods on my enormous paws (you really should feel honoured that I’m telling you this).
But not only did I love the talking lion (and later, talking horse, because who didn’t adore Bree from The Horse and His Boy?), but I loved the stories. The magic and mythology which connected our world seamlessly to Narnia—the lamppost, the wardrobe and how they came to be—seemed to make so much sense. Lewis’s Narnia was so perfectly parallel to ours in such a way that a child could very easily believe one day he or she could be swept into another land where animals talk and a ten year old can save the world. Where a lion’s breath is healing (and somehow doesn’t smell like carcass). Where people are allowed to make mistakes, as long as they choose right in the end. Edmund (and later, Eustace) succumbs to evil, yet somewhat understandable impulses, but later learns and grows, and is accepted, because the good guys always forgive. Trust me: for a mischievous child, this is a very important message.
So yes, those books had a very profound impact on me. As an adult, I own a complete set, which is proudly displayed on my bookshelf. I go see the movies and quietly tear up while watching. Not because of the sad parts, but because I become nostalgic for what was such a huge and important part of my childhood.
My greatest hope is that someday, some other child will read one of my books, close it, sigh with pleasure and then return back to the beginning to read it again, because she loved it just that much. That would have to be the biggest honour any author could receive. I know Mr. Lewis received that honour countless times for his Narnia books; many times from me alone.
-Joanne
Posted by Book Junkies at 8:00 AM