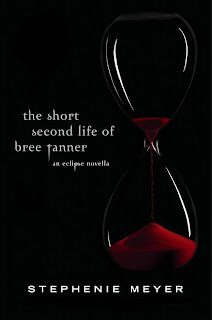 All Bree knows is that living with her fellow newborns has few certainties and even fewer rules: wIatch your back, don't draw attention to yourself and, above all, make it home by sunrise or die. What she doesn't know: her time as an immortal is quickly running out.

Then Bree finds an unexpected friend in Diego, a newborn just as curious as Bree about their mysterious creator, whom they know only as "her". As they come to realize that the newborns are pawns in a game larger than anything they could have imagined, Bree and Diego must choose sides and decide whom to trust. But when everything you know about vampires is based on a lie, how do you find the truth?
*****
It's been a long time since I read anything by Stephenie Meyer so when I saw The Short Second Life of Bree Tanner at the bookstore I thought I should check it out. To be honest, I was not sure how this book was going to turn out but am still glad that I gave it a chance.

After reading the Twilight saga and living inside Bella's head, it was refreshing to be thrown into the same world but from a different perspective. Bree Tanner is a character unlike the many others who have graced the pages of Meyer's novels. Instead of growing up in a pretty sheltered life like Bella, Bree went from an abusive home to the streets all before the age of 16. Living as a runaway teen put Bree into a vulnerable position when Riley targeted her. When he approached her and offered to buy her a burger, Bree was only interested in the prospect of eating. In her internal dialogue after the event, she reminisces about how she would have done Riley a "favour" if he had of demanded payment for the burger. It is this kind of view of the world that separates this book from the saga.

The one thing that I was not expecting in this book was the romantic reationship between Bree and Diego. Even though they were never officially together, and they barely had a chance to even try, the bond between them was a critical part of this book. In a time when they were both craving blood more than any kind of human affection, Bree and Diego saw something in each other. Of all of the newborn vampires under Riley's command though, it was Fred who I really found my self most intrigued with. While Bree and Fred were had a strictly platonic relationship, I was struck by how he felt responsible for her well being. Fred protected Bree and in turn probably kept her alive longer as a vampire than she might have been.

This was my first experience with a novella and as such I was not accustomed to the pace. The Short Second Life of Bree Tanner moved quite slow and as such did not always hold my attention. The amount of time spent hunting, and biding time in the basement of yet another house, seemed to be too repetitive in nature for such a short piece of work. Additionally, the knowledge of Bree's fate was never far from my mind while reading which did not make it easy to reach the end. Despite this though it was nice to hear Bree's thoughts when she cam across the Cullens at the end of the book. The way that she saw them brought to light the true rarity of their coven.

For fans of the Twilight saga I suggest that you read this book even if it is only to gain a different perspective about the events in Eclipse. It is not a remarkable read, but it also isn't terrible either. I must say though that reading this alternative perspective made me wish that Midnight Sun was actually a reality. I still think that if Meyer truly values the fandom that surrounds these books she should eventually release Edward's version of Twilight so that fans can devour it like they did the rest of the series.