Review: THE OUTSIDE BOY (Jeanine Cummins) 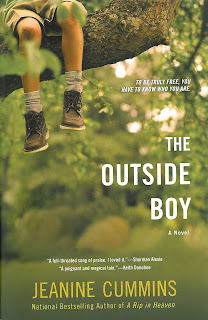 Ireland, 1959: Young Christy Hurley is a Pavee gypsy, traveling with his father and extended family from town to town, carrying all their worldly possessions in their wagons. Christy carries with him a burden of guilt as well, haunted by the story of his mother's death in childbirth.

The peripatetic life is the only one Christy has ever known, but when his grandfather dies, everything changes. His father decides to settle down temporarily in a town where Christy and his cousin can attend mass and receive proper schooling. But they are still treated as outsiders.

As Christy's exposure to a different life causes him to question who he is and where he belongs, the answer may lie with an old newspaper photograph and a long-buried family secret that could change his life forever...

The moment you open the pages of The Outside Boy you will notice how incredibly detailed the language is. The dialogue that is used throughout the novel aims at distinguishing one character from the next, as well as the Pavees (traveling gypsies) from the Buffers (people of wealth). Jeanine Cummins has captured the essence of Irish dialogue in such a way that readers will be able to truly hear the unique accents. The language used is also true to the era, bringing in popular vocabulary from the 1950s. Every aspect of the dialogue used feels authentic and in turn paints a genuine picture of Ireland in 1959.

The narrator of this novel is the main character Christy (Christopher Hurley) and rightfully so. The novel is entirely about his journey as a young man and would fail to deliver such an emotional response if it were written in third person. The personal dialogue that Christy has with himself is incredibly detailed and will no doubt have a powerful effect on readers. One instance in particular is when Christy is pondering about the seven minutes he spent with his mother as a baby before her death. He asks whether or not his mother had the opportunity to even love him. It is this type of inner turmoil that truly defines Christy's character throughout the novel. As the story progresses one can see through his internal conversations how his worries dissolve and how sure he becomes of himself.

The relationships in this novel are all written with purpose and each one assists in telling Christy's story. Particularly, the bond that Christy has with his Grandda, even after his death, has such a great impact on his life. When his Grandda was alive he shared with Christy his love for animals, and in death he shared a clue about who Christy is. While readers will not get to know Christy's Grandda on their own they will understand who he was through Christy's memories and internal dialogue. The death of his grandda, while heartbreaking, acts as a catalyst for change and sends Christy out on a journey of self-discovery. What his Grandda gives Christy in death helps him form relationships that will forever change him.

There are many themes in the pages of this book and each one lends a hand in telling Christy's story. The concept of possessions is one theme that is carries the novel from start to finish. As Pavees, Christy and his family are traveling across Ireland with essential items that they require for survival. They have no need for "junk" that they will have to carry with them from place to place. Christy struggles with this notion; he finds it difficult to leave possessions behind. What can be seen by the end of the book however is Christy`s understanding of the role of possessions in one`s life. He understands that it is people, not possessions, that you should carry with you on your personal journey. This can be seen with his gifts at the end of the novel; the one left on a little boy's waiting pillow and the ones in a woman`s tranquil greenhouse. Each of the gifts that Christy leaves behind illustrates his ability to relinquish the power that possessions hold over him.

As a novel, The Outside Boy has such great depth that it generates much discussion (this is probably why there is a Reader's Guide in the back of the book). While there is not enough time, nor space on this blog to discuss every element, it is crucial that I discuss literacy in relation to this book. The joy of reading is touched on at various points in this novel and has a role in many relationships. As a Pavee, Christy is believed by much of society to be illiterate however his father made it a point to share his love of reading with his son.
It is a love of reading that bonded Christy's mother and father, Christy to his father, and Christy to Mrs. Hanley at the book store. Literacy plays such an important role in this book. It gives Christy part of his freedom and helps him realize the truth about his past.


You would never know that The Outside Boy is Jeanine Cummins first novel. Christy`s journey is told in such a way that it flows effortlessly from beginning to end. This novel is an honest tale about a young boy finding himself at a crucial point in his life and it will take you on an incredible emotional journey. The Outside Boy is a flawless, poignant and beautiful story. A classic.

*A special thanks to Melissa Broder at Penguin Group USA for sending me a copy of this book.
Posted by Book Junkies at 8:36 PM