ARC Review: The Education of Hailey Kendrick (By: EILEEN COOK) 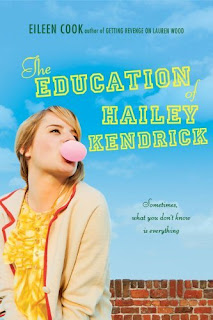 Hailey Kendrick always does exactly what's expected of her. She has the right friends, dates the perfect boy, gets good grades, and follows all the rules. But one night, Hailey risks everything by breaking a very big rule in a very public way...and with a very unexpected partner in crime. Hailey gets caught, but her accomplice does not, and Hailey takes the fall for both of them.
Suddenly, Hailey's perfect life--and her reputation--are blowing up in her face. Her friends are all avoiding her. Her teachers don't trust her. Her boyfriend won't even speak to her for long enough to tell her that she's been dumped.
They say honesty is the best policy--but some secrets are worth keeping, no matter the cost. Or are they?
**********
This was my first go at reading a novel written by Canadian Author Eileen Cook. The Education of Hailey Kendrick was beyond refreshing. Hailey was one of the most lovable heroines I have had the pleasure reading. The novel centers around rich and some what famous teenagers as they work through their last year of high school at Evesham boarding school. Hailey likes to play by the rules and on top of being an over achiever, she is well loved, popular, and dating the hottest guy in school. What could possibly be wrong or go wrong?
Right from the beginning, it was hard to not fall in love with Hailey. She may seem a tad up tight about school and accident statistics, but as her story progresses, all of her little quips make sense. Hailey comes from money and may be dating the child of movie star parents, however she never takes what she has for granted. Hailey is always trying to put the needs of her friends and her father before her own, no matter the cost. But Hailey's loyalty comes at a great cost to herself.
The other characters in the novel are just as well written and enjoyable as Hailey, although at times I became frustrated with a few of Hailey's friends. My favourite character was Drew. Cook's characterization of him was brilliant! He was charming, smart, sarcastic, funny, and completely loyal. Some of my favourite moments in the novel took place in the dialogue between Hailey and Drew.
Cook deals with issues of growing up, family, responsibility, and sometimes doing things so beyond your own character that you end up on a whirlwind ride. A ride so out of control, that for once, you are living life for yourself and not for everyone else.
The Education of Hailey Kendrick was a superbly written and refreshing take on teenage life and how even the most composed can sometimes come unraveled. I highly suggest this book to anyone who is a fan of YA fiction and for those who aren't, this is a fantastic place to start.
* Special thank you to both Michelle and Beth at Simon and Schuster Canada.

Email ThisBlogThis!Share to TwitterShare to FacebookShare to Pinterest
Labels: Eileen Cook, Simon and Schuster, The Education of Hailey Kendrick