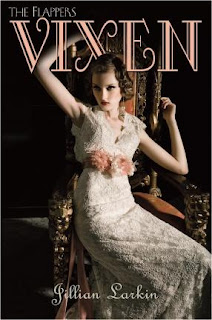 Every girl wants what she can’t have. Seventeen-year-old Gloria Carmody wants the flapper lifestyle—and the bobbed hair, cigarettes, and music-filled nights that go with it. Now that she’s engaged to Sebastian Grey, scion of one of Chicago’s most powerful families, Gloria’s party days are over before they’ve even begun . . . or are they?

Clara Knowles, Gloria’s goody-two-shoes cousin, has arrived to make sure the high-society wedding comes off without a hitch—but Clara isn’t as lily-white as she appears. Seems she has some dirty little secrets of her own that she’ll do anything to keep hidden. . . .

Lorraine Dyer, Gloria’s social-climbing best friend, is tired of living in Gloria’s shadow. When Lorraine’s envy spills over into desperate spite, no one is safe. And someone’s going to be very sorry.

Wendy Anderson and Hakiam Powell are at opposite ends of the spectrum—the social spectrum, the financial spectrum, the opportunity spectrum, you name it. Wendy lives in an all-white suburb of Philadelphia, where she’s always felt like the only chip in the cookie. Her dad, who fought his way out of the ghetto, doesn’t want her mingling with “those people.” In fact, all Wendy’s life, her father has told her how terrible “those people” are. He even objects to Wendy’s plan to attend a historically black college. But Wendy feels that her race is more than just the color of her skin, and she takes a job tutoring at an inner-city community center to get a more diverse perspective on life.

Hakiam has never lived in one place for more than a couple of years. When he aged out of foster care in Ohio, he hopped a bus to Philly to start over, but now he’s broke, stuck taking care of his cousin’s premature baby for no pay, and finding it harder than ever to stay out of trouble. When he meets Wendy at the tutoring center, he thinks she’s an uppity snob—she can’t possibly understand his life. But as he gets to know her better, he sees a softer side. And eventually—much to the chagrin of Wendy’s father and Hakiam’s cousin—they begin a rocky, but ultimately enlightening, romance.

HAPPY READING!
Posted by Book Junkies at 9:00 AM