Sixteen-year-old Jack gets drunk and is in the wrong place at the wrong time. He is kidnapped. He escapes, narrowly. The only person he tells is his best friend, Conner. When they arrive in London as planned for summer break, a stranger hands Jack a pair of glasses. Through the lenses, he sees another world called Marbury.
There is war in Marbury. It is a desolate and murderous place where Jack is responsible for the survival of two younger boys. Conner is there, too. But he’s trying to kill them.
Meanwhile, Jack is falling in love with an English girl, and afraid he’s losing his mind.
Conner tells Jack it’s going to be okay.
But it’s not.
Andrew Smith has written his most beautiful and personal novel yet, as he explores the nightmarish outer limits of what trauma can do to our bodies and our minds.

Blaise Fortune, also known as Koumaïl, loves hearing the story of how he came to live with Gloria in the Republic of Georgia: Gloria was picking peaches in her father’s orchard when she heard a train derail. After running to the site of the accident, she found an injured woman who asked Gloria to take her baby. The woman, Gloria claims, was French, and the baby was Blaise.

When Blaise turns seven years old, the Soviet Union collapses and Gloria decides that she and Blaise must flee the political troubles and civil unrest in Georgia. The two make their way westward on foot, heading toward France, where Gloria says they will find safe haven. But what exactly is the truth about Blaise’s past?
Bits and pieces are revealed as he and Gloria endure a five-year journey across the Caucasus and Europe, weathering hardships and welcoming unforgettable encounters with other refugees searching for a better life. During this time Blaise grows from a boy into an adolescent; but only later, as a young man, can he finally attempt to untangle his identity. 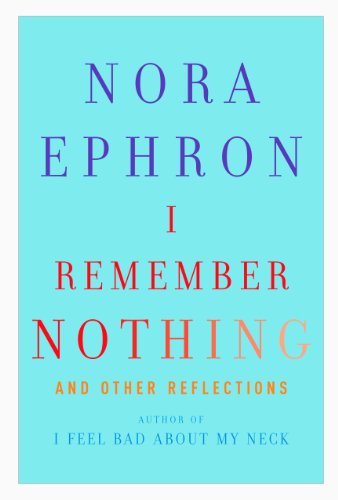 Title: I Remember Nothing And Other Reflections
Author: Nora Ephron

Nora Ephron returns with her first book since the astounding success of I Feel Bad About My Neck, taking a cool, hard, hilarious look at the past, the present, and the future, bemoaning the vicissitudes of modern life, and recalling with her signature clarity and wisdom everything she hasn’t (yet) forgotten.

Ephron writes about falling hard for a way of life (“Journalism: A Love Story”) and about breaking up even harder with the men in her life (“The D Word”); lists “Twenty-five Things People Have a Shocking Capacity to Be Surprised by Over and Over Again” (“There is no explaining the stock market but people try”; “You can never know the truth of anyone’s marriage, including your own”; “Cary Grant was Jewish”; “Men cheat”); reveals the alarming evolution, a decade after she wrote and directed You’ve Got Mail, of her relationship with her in-box (“The Six Stages of E-Mail”); and asks the age-old question, which came first, the chicken soup or the cold? All the while, she gives candid, edgy voice to everything women who have reached a certain age have been thinking . . . but rarely acknowledging. 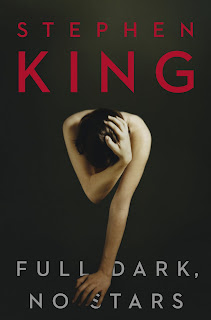 A new collection of four never-before-published stories from Stephen King.

1922
The story opens with the confession of Wilfred James to the murder of his wife, Arlette, following their move to Hemingford, Nebraska onto land willed to Arlette by her father.

Big Driver
Mystery writer, Tess, has been supplementing her writing income for years by doing speaking engagements with no problems. But following a last-minute invitation to a book club 60 miles away, she takes a shortcut home with dire consequences.

Fair Extension
Harry Streeter, who is suffering from cancer, decides to make a deal with the devil but, as always, there is a price to pay.

A Good Marriage
Darcy Anderson learns more about her husband of over twenty years than she would have liked to know when she stumbles literally upon a box under a worktable in their garage.

HAPPY READING!
Posted by Book Junkies at 7:29 AM