Review: GRAVITY BRINGS ME DOWN 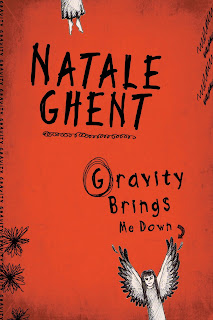 
Sioux Smith is sharp, funny, and wry, and is pretty certain that she sees the world of high school differently from everyone else - a belief that is cemented when she makes an uneasy discovery about one of her school's "popular" teachers. And while she feels alone at her high school and in her unique slant on small-town life, Sioux finds a kindred spirit in the most unlikely of people: an elderly stranger, who has more insight despite her progressing dementia than anyone else in Sioux's life. What Sioux and "Miss Marple" learn about each other over tea, illicitly secreted wine, and Coronation Street, makes for a novel with heart and grit in equal measure.


A couple of weeks ago I attended to Word on the Street Festival in Toronto. At this event I stopped by the Remarkable Reads Tent for the Youth Hour and I am so glad I did because it was there that I discovered Natale Ghent. The reading that Natale did was from Gravity Brings Me Down which is a self proclaimed story about self-discovery. The excerpt that she read was funny and grabbed your attention. It seemed like a good read so I picked up a copy there and then. Little did I know that I was about to get sucked into Sioux Smith's world and that I would not want to leave.
Gravity Brings Me Down opens on an intense note with the main character, Sioux Smith, standing at the edge of a dam with questions about suicide running through her mind. Suddenly the police arrive willing her to step back from the edge and half the town of Sunnyview is watching. It is here that a confused elderly woman, who Sioux names Miss Marple, gives Sioux an out when she mistakes her for someone named Marie.
Miss Marple, a.k.a. Mabel gives Sioux an out, but instead of fading into the shadows the elderly woman comes front and center the same time Sioux is in this rut. Sioux is plagued by thoughts about the significance of life and about the nature of death.

When you look at Sioux's life though, you really have to wonder how someone in her situation could become so engulfed in thoughts of death. Her family is a little out of the ordinary, but nothing too wild. Her parents are loving people, and her sister Peggy is okay minus some of her annoying mainstream qualities. What I came to realize though is that our lives often look different from the outside and that sometimes when we are in them we find it difficult to comprehend what is happening. That and, once you get a taste of Sioux's high school life it is pretty obvious why she contemplates about the endless abyss.
Sioux's high school is like the breeding ground for insanity. There are the usual cliques that we all know and hate, but they are even better - especially the jocks. Bif for example is this beefy athlete with some unidentified complex. The only character in the book that even remotely compares to the creature that is Bif would be Chocko. As a philosophy teacher Chocko is a pretty cool guy, but his extra-curricular activities make him creepy and psychotic.  Then there are Tod and Steve who have an interest in Sioux. Tod is what authorities would call "a stalker" since he follows Sioux all over town on his moped. Steve on the other hand is a bonafide stud. He is also an athlete with a brain which like Sioux says is kind of a "turn on". With all this insanity you might ask: "How does Sioux get through the school days?" Her best friend Sharon and the black sludge coffee from the Tip.
Despite the number of relationships that are written about in the book, it is the one between Sioux and Mabel that carries the most weight and the one that impacted me the most. These two characters are in two very different points in their lives and yet they manage to form this incredible friendship. Ghent's description of Mabel's apartment, and of her life, will break your heart. It will gnaw at that little place inside you that worries about dying alone. While Sioux and Mabel are at opposite ends of the spectrum, there is no denying that they need each other. Sometimes the only thing that they have is each other. For Sioux their relationship is about learning and for Mabel it's about living, but even then they never take more from the other person than they need. I belive wholeheartedly that it is this relationship between Sioux and Mabel that sets Ghent's book apart from other stories of self-discovery and puts her into a league of her own.
Gravity Brings Me Down never takes itself too seriously and it is Ghent's writing style that allows for this. The humour that touches almost every page in the book balances the weight of the heavy issues that are tackled. This book is about many things: life, self-disocovery, and about finding friendship in the most unlikely of places. It is raw, honest, and beautifully written. I highly recommend this book, especially to anyone who has ever lost their way. It will put your life into perspective and will make you smile, even through your tears.
-Christie
Posted by Book Junkies at 5:56 PM

Email ThisBlogThis!Share to TwitterShare to FacebookShare to Pinterest
Labels: Natale Ghent, The Word on the Street