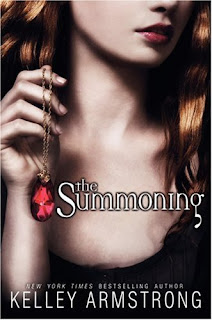 Chloe Saunders sees dead people. Yes, like in the films. The problem is, in real life saying you see ghosts gets you a one-way ticket to the psych ward. And at 15, all Chloe wants to do is fit in at school and maybe get a boy to notice her. But when a particularly violent ghost haunts her, she gets noticed for all the wrong reasons. Her seemingly crazed behaviour earns her a trip to Lyle House, a centre for disturbed teens.
At first Chloe is determined to keep her head down. But then her room mate disappears after confessing she has a poltergeist, and some of the other patients also seem to be manifesting paranormal behaviour. Could that be a coincidence? Or is Lyle House not quite what it seems…? Chloe realizes that if she doesn’t uncover the truth, she could be destined for a lifetime in a psychiatric hospital. Or could her fate be even worse…? Can she trust her fellow students, and does she dare reveal her dark secret?


Ashley: "I'm team...Derek!"
As someone who loves Kelley Armstrong's adult novels I know exactly the type of guy that Derek grows up to be, hence why I am Team Derek. The irresistible nature of the werewolves that Armstrong writes so well is not lost on Derek. His intelligence and strength are admirable qualities that I found quite appealing.

The tension that Derek has with Chloe is absolutely adorable. They bicker so much but everyone knows that it is always in good taste. I've always thought that anyone who gets as frustrated with each other as Derek and Chloe have to be in love. They both put the effort into ticking each other off which  Derek and Chloe are always there for each other, and in turn help each other grow into their supernatural gifts.

Simon is sweet, but he never seems to measure up to everything that Derek is. The relationship that Simon has with Chloe is nothing more than friendship and could never be more. Chloe and Derek were always meant to be, even if they didn't know it. ;)
Christie: "I'm team...Simon!"

I have this thing for "underachievers" like Simon. From the start of this series you knew that Simon was not going to win Chloe's heart. There was this anger between Chloe and Derek. The kind that is dripping with sexual tension. It was never like that with Simon. Hence why I say that it was clear they were never meant to be. I don't know why Team Derek is so popular though. The only descriptor I can even think of to describe him is "sweaty". While I understand that Derek is going through certain changes, and that he will no doubt have to sweat fiercely, it's not for me.
Poor handsome Simon who was never destined to get the girl. It's a shame really. If Simon had a gal like  Chloe then maybe he could have reached his full potential. Every girl thinks about that, right? Finding a guy and being the reason he strives to be the best version of himself? That's how I feel about Simon and how I wish Chloe felt about him too.
Whose team are you on?

Email ThisBlogThis!Share to TwitterShare to FacebookShare to Pinterest
Labels: Kelley Armstrong, the awakening, the reckoning, the summoning