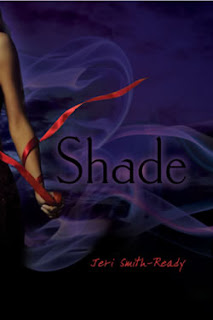 Best. Birthday. Ever. At least, it was supposed to be. With Logan's band playing a critical gig and Aura's plans for an intimate after-party, Aura knows it will be the most memorable night of her boyfriend's life. She never thought it would be his last.
Logan's sudden death leaves Aura devastated. He's gone.
Well, sort of.
Like everyone born after the Shift, Aura can see and hear ghosts. This mysterious ability has always been annoying, and Aura had wanted nothing more than to figure out why the Shift happened so she can undo it. But not with Logan’s violet-hued spirit still hanging around. Because dead Logan is almost as real as ever. Almost.
It doesn't help that Aura’s new friend Zachary is so understanding—and so very alive. His support means more to Aura than she cares to admit.
As Aura's relationships with the dead and the living grow ever complicated, so do her feelings for Logan and Zachary. Each holds a piece of Aura's heart…and clues to the secret of the Shift.

Okay, so let me begin by stating how hard this book was for me to choose anyone. Not because I'm not drawn to one guy over the other, but the book itself is so heartbreaking, that picking somebody feels wrong. I adored the relationship between Logan and Aura -- when I wasn't crying my eyes out. If Logan didn't die, he would have been Aura's one and only. However, he dies. It's a fact and it happens so early in the novel, that their relationship isn't given a chance to blossom in front of the reader. Although they continue to have a "relationship" it isn't healthy, and it's wrong. I felt Logan was selfish and although he meant well, in the end his actions were foolish! Cocaine, really?
With that said, and even though the book pains me -- I can't begin to imagine the implications of losing the love of your life -- I would be Team Zachary. Zachary is understanding and he's there for Aura during a time when her life has been flipped upside down. He does show up at a time that seems far too perfect, but he's there nonetheless. Zachary is gorgeous, but I find it hard to argue based on looks in this novel. It's about so much more. What Aura needs more than anything is someone stable in her life. Although having to say goodbye, holding onto Logan is far from healthy.  I think it would be harder to have to say goodbye to someone and then continue to have their presence in my life; a presence that you can see and hear, but not feel. So although Zachary may not be the one that had Aura's heart from the beginning, he is the one that will help her heal -- help her love again. And in response to Christie's Casper comment, Casper didn't get the girl. He had an ethereal relationship -- non existent, celestial--  and was granted the chance to be human for a moment. In the end, Casper didn't end up with Kat. He sacrifices that chance to save her father.

I will start off by saying that Logan is probably one of my favourite fictional characters of all time.What did I know about Logan before he died? He was a rock star in progress, he was kind of self centered and he liked to have a good time. As soon as I got used to having him around as a human though, he was gone. Logan's death broke me. You would know this if you were sitting near me at the Smart Chicks event in Brampton. As soon I even started to talk about his death I started to cry, in public. Pathetic, I know, but his death was so sudden that the loss was very raw. I barely had enough time to fall in love with him as a human, so most of my affection for him is based on Logan as a shade. As a shade you get to see everything about Logan that you missed out on when he was alive: the protective, loving, and even jealous sides. I know there are people out there, like Ashley for example, who believe Zachary is the best choice, but why? Just because he's alive? How hypocritical of you. Don't you love Casper the friendly ghost? Yeesh. ;)
Dead or not, Logan is the perfect balance of bad boy and sweetheart that keeps me coming back for more. He is eternally creative, forever a rock star, and I will adore him even if he crosses over...
P.S. Logan, can I keep you?

"You think the second I sign a deal, I'll turn into some kind of man-slut." He put his hands over mine, pressing my palms against his chest. "You've always been the only one, and you always will be." -44

"I don't know if you can hear me," Logan whispered, "but I came here to give you something. Something I shouldn't have kept." - 280

"I couldn't blame her for it. All I ever talked about was playing music and being famous." He squirmed while the translator caught up. "I wanted to show her that none of that mattered compared to being with her. I would've given it all up, Aura, I swear." -287