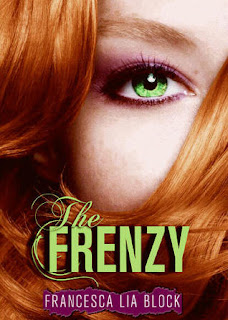 Love is a werewolf, influenced by the moon and terror, and always about to change. Liv has a secret. Something happened to her when she was thirteen. Something that changed everything. Liv knows she doesn't belong anymore-not in her own skin, not in her family . . . not anywhere. The only time she truly feels like herself is when she's with her boyfriend, Corey, and in the woods that surround her town. But in the woods, a mysterious woman watches Liv. In the woods, a pack of wild boys lurks. In the woods, Liv learns about the curse that will haunt her forever. The curse that caused the frenzy four years ago. And that may cause it again, all too soon.While Corey and Liv's love binds them together, Liv's dark secret threatens to tear them apart as she struggles to understand who-or what-she really is. And by the light of the full moon, the most dangerous secrets bare their claws. . . .
I'm not sure where to actually begin with this review. The Frenzy is my first Francesca Lia Block experience and in no way am I judging her writing or anything else she has previously written. With that said, I was not a fan of The Frenzy. I found that I struggled quite a bit trying to like the story. You should never have to try and like something; it should be organic - a natural process. I can see the appeal and believe I understand what Francesca was trying to do with this particular paranormal teen fiction, I just didn't take to it.


Developments in the plot come at you fast but also slow. There were a lot of gaps within the structure of the story that found me constantly scratching my head, trying to pull it altogether. Just when you begin to think things are taking shape - heading into some direction - they falter and lose their way; the path is never clear.  The main character, Liv, is extremely hard to like. She is in the midst of trying to figure out her life path, in a town that is non accepting of anything that isn't the "norm."  She is also different, in a way where she can actually transform into a wolf. The concept and idea of the Frenzy was different and I liked that -female empowerment, overcoming a stereotypical society. I just wasn't keen on how Liv dealt with everything. There is also one questionable part where Liv almost wishes to go through physical violence then deal with her current emotional turmoil. That left me baffled. She also never really takes the time to try and understand what she is and when she does come across her "pack" she listens and then flees.


I felt that I could have enjoyed Pace, but his story was rushed. It would have made sense if he served a purpose. In the end, Pace's story left me sad and confused. More questions began to form than answers. Corey was an okay character, but again, you really don't get to know Corey. You seem him through the eyes of Liv, and you can tell he loves her. He has no reaction to her being a werewolf - none at all. That to me seemed off. Even if you end up being okay with your loved one shapeshifitng in the end, there is always a brief moment of fear and questions.


As for Liv's parents; I couldn't stand them. Gramps was one of the only characters I enjoyed and even with Gramps questions were raised without answers.


I found it hard to like this story, especially with the ending. Again, I was left asking questions to practically everything that happened in the novel. I believe only two points in the plot were really answered and they were both pretty translucent from the start. The ending just left me beyond bewildered, stunned, and a bit angry.  The story has great potential but in the end falters.


If you are a fan of Francesa Lia Block or simply curious, I would say give this book a try. Every one has different and opinions and likes.


*Thank You Melissa from HarperCollins Canada for sending us the book for review
Reviews on Goodreads
-Ashley
Posted by Book Junkies at 2:37 PM

Email ThisBlogThis!Share to TwitterShare to FacebookShare to Pinterest
Labels: The Frenzy