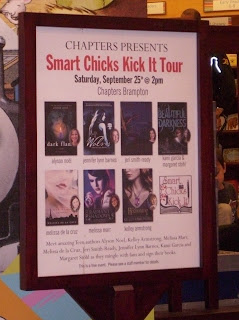 Saturday, September 25th in Brampton, Canada marked the last stop on the Smart Chicks Kick It! Tour. We were lucky enough to be able to attend this wonderful event and headed to the Chapters store early to get a good seat. Apparently we are not hardcore enough though because by the time we got there about 15 people were already waiting. After picking out and paying for a few last minute book purchases we grabbed a couple chairs and settled in for the 3 and a half hour wait. As we were waiting we chatted with a few book lovers who were sitting near us which made the time pass. We also watched them set up the make-shift stage where the authors were going to be sitting. At this point in the morning our anticipation was building for the authors to arrive... 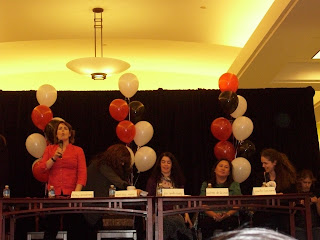 The authors arrived one by one and passed all of the waiting fans. At this point it was pretty much impossible to control our excitement! To entertain us before the event, Chapters Brampton held a bunch of giveaways for the waiting readers. Thanks to our good friend Twitter, and Ashley's quick reflexes when I threw my phone at her, we won a $25 gift card from Chapters! Yay us! There were also a number of pairs of tickets to the Teen Read Awards which took place later that night in Toronto. Despite the epicness of these giveaways there was also a basket of books and gear put together by the Smart Chicks and one lucky girl won it! By this time there were hundreds of fans lined up in the Chapters and everyone was anxiously awaiting the start of the event. 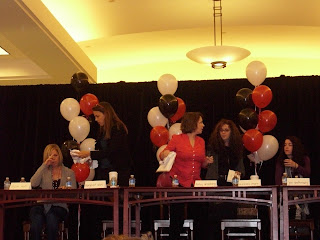 At 2:00pm the time had come and Chapters Brampton announced each author one by one as they found their chair. Minus the darling Kami Garcia, (who was unable to attend but we wish her well!), the Smart Chicks: Kelley Armstrong, Melissa Marr, Alyson Noel, Jeri Smith-Ready, Margaret Stohl, Jennifer Lynn Barnes and Melissa de la Cruz grabbed a seat and the event began! Kelley took the lead and gave the audience a little bit of a background about the tour. As most of you know the Smart Chicks Kick It! tour was put together by Kelley and Melissa so that they could have their tour, their way. It is important to note that this means the tour stops were even FUNDED by the authors themselves, hence why they kick it! 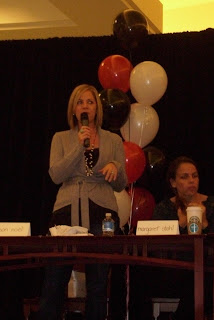 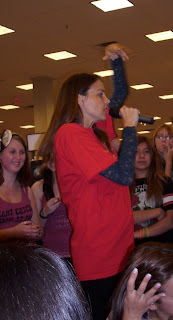 After the ladies settled in they gave away some more FREE SWAG despite the big basket that they already donated. One lucky reader got their hands on an ARC of Melissa Marr's Darkest Mercy, and another reader on Kelley Armstrong's The Gathering. Pretty cool, eh? We thought so. In addition to this readers snagged Smart Chicks t-shirts and Beautiful Creatures swag! When all the giveaways were over the authors did some really fun little games and had a Q&A session. The best part of all this? Margaret Stohl. We had no idea how incredibly funny and animated she was! We were both cracking up every time she spoke. It was so hilarious!
After a good 45 minutes of warming up the audience it was time for the signing to begin! The rule for the Smart Chicks tour? 3 books, per author, per time in line. Incredible! With our stack of books weighing us down we filed into the line and waited to go up and have our books signed. Not only did we bring our own books to be signed, but we brought the books that our contest winners had chosen. Every book got signed, but more than that, every book got personalized. Ashley chatted a lot with each of the authors too which was fabulous. I on the other hand was pretty quiet especially when I had Jeri Smith-Ready sign Shade for me. It was pretty much a fan girl moment but I am not ashamed. ;)
When meeting all of the authors they thanked us for attending the event. Yes, THEY thanked US. We were confused too. These authors took time out of their own schedules and money out of their own pockets to set out on this incredible tour. They traveled all over the U.S. and even made the effort to stop in Canada. They gave away ARCs and wonderful swag, all the while signing an abundance of books until their hands were cramped. So Ashley and I would like to take this time to thank the Smart Chicks. Thank you Kelley and Melissa for having the idea for a tour and for making it a reality. Thank you to Alyson, Jeri, Margaret, Jennifer and Melissa de la Cruz for making the Canadian stop on the Smart Chicks Kick It! tour. You were all so incredibly sweet to us and we are humbled by your generosity. Finally, a thank you to all of the Smart Chicks, at every tour stop. You are all incredible women and wonderful role models for girls everywhere.
Much love,
Ashley and Christie