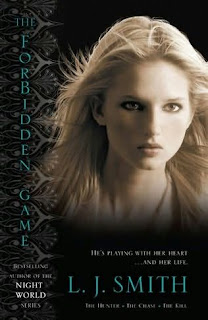 1416989404
9781416989400
Available from: Amazon, Chapters, The Book Depository
List Price: $7.91 USD, $12.73 CAD, $7.76 CAD
Rating: 3/5
L.J. Smith. The name has taken on a new meaning to fans who dedicate every Thursday night to watching the television adaptation of her infamous Vampire Diaries series. With the re-release of The Vampire Diaries series there was a demand from a new generation of fans for more stories from this wonderful author. Just this year, L.J. Smith's The Foridden Games series was re-released as one paperback that includes each individual book: The Hunter, The Chase and The Kill. I have decided to review each book separately and to then conclude with a discussion about the series in its entirety.


Jenny wants to get her boyfriend, Tom, a special game for his birthday party.  However, she can’t help  but be fascinated by the boy with the white-blond hair who sells her a strange game as a present.  It turns out that the boy, Julian, is the youngest of those from the Shadow Lands, a race of evil beings who live invisibly just beside our own world.  Once Jenny opens the game, she is in his land.  Julian is determined to seduce her, but he has to work by a set of inflexible rules, only touching Jenny where she has reached for him.
In the fantasy house that Julian has created, where everyone at the party must face their greatest fear, Julian himself is Jenny’s worst nightmare. . . and maybe her dream lover, as well.
To be honest, it took me a while to get into this book. The Hunter is the first book in the series and I really was not sure how I felt about it when I began reading. It has been a long time since I have struggled to become interested in a book and I felt guilty about it. While other readers may not feel the same way, I attribute the difficulty of getting interested in the book to the publication year. The books were originally published in 1994 so they are written for the previous generation of young adults. Once I had reminded myself of this it was easier to enjoy the book and to continue reading.

The story begins with the main character Jenny on the night of her boyfriend Tom's birthday party. Since she is throwing the party and all of her original plans failed, she wants to get a fun and exciting game that all of her friends can play. When Jenny enters the More Games store that night she comes face to face with a strange boy who sells her this peculiar game in a white box. The game turns out to be a paper house where each player fills a room with a written description of their worst nightmare. Jenny and her friends are sent into the game where she reunites with the boy from the games store, Julian. The game that ensues will end one of two ways; either the players gain their freedom, or Julian keeps Jenny.

The concept of the series is quite interesting and different from other types of books that I have read. L.J. Smith has this unique imagination that never ceases to amaze me. This book was intriguing for me because it focused on the nightmares of each character and forced them to live through the experience. Each character's nightmare gave insight into the type of person they truly are which was a great way to begin the series. Overall this book gave great insight into the differences between the characters especially the dark and deceitful Julian.

The Chase
Jenny begins to get terrifying phone calls and soon it’s clear that Julian is loose is the real world.  More and more, Jenny falls under his spell, allowing herself the freedom to do as she likes, no matter the consequences.  It seems that Jenny has chosen Julian over Tom.  But then her friends are disappearing, sucked into the Shadow Lands, paper dolls left in their places.  Can Jenny outwit Julian without giving in to his demands entirely?
Julian. After he taunted and tested Jenny and her friends in The Hunter, he is now out for revenge in The Chase. What is there to say about such a dark character? In the series, Julian is referred to as "The Prince of Darkness" which fans of The Vampire Diaries remember as the description of a certain Salvatore brother, Damon. The many similarities between Julian and Damon Salvatore are uncanny. Not physically of course, but emotionally. Julian, like Damon, is sly, dangerous and oh so delicious. He is the kind of guy that a girl just can't help but want to save. It seems that L.J. Smith knows how to write those characters well!

I have to say that in the series The Chase is probably my favourite. At this point in the series all of the characters on edge as each fears that they will be taken back to Julian's world.  The type of game that is being played is appealing. Chase games, like 'Hide'n'Seek', have that element of surprise that in incredibly intriguing. The idea of running from something and never knowing when it will catch you is quite thrilling and will keep readers interested in this book.  Additionally, The Chase is also about Jenny's relationship with Tom and how it is changing dramatically. The two of them go from being a single unit to acting like strangers in a matter of pages. For those who want Julian and Jenny to be together, well you might find this storyline intriguing. The changes that occur in this book are a catalyst for what is to come.

Jenny returns to the place where it all began; her grandfather’s house, where as a child she first met the child-Julian.  A door with a strange rune on it opens to the most fantastic creation of Julian’s of all: an empty amusement park that Jenny loved as a child.  Except here, all the rides are deadly.  More, Jenny must survive her confrontations with an increasingly frustrated and determined Julian.  Will he really kill her if he can’t have her?  Jenny forces him to make the choice—and two worlds are changed forever.
The final book in the series, The Kill, takes readers back into a world where Julian controls the elements. The amusement park that Jenny visited as a child becomes the set of the characters newest challenge; finding and rescuing two of their friends. While the amusement park in Julian's world is quite eery, it was never as frightening as one might want it to be. The description of the park however is quite detailed and will paint an interesting picture in the reader's mind.

As the characters make their way through the park, Jenny is confronted by Julian on multiple occasions. While her alone time with Julian is nothing new, the way that it is played out in The Kill is. Readers will get to see both sides of Julian even more clearly than the previous books and will be starving for more of him. Even those who are "Team Tom" might just be won over by Julian in this book. His moments with Jenny always leave something to be desired because they never conclude themselves. As the final book of the series I found that The Kill covered the character's relationships well, but did not execute the final game as well as one might have wanted.


Overall, The Forbidden Game series is intriguing, but it can also be kind of repetitive. The repetition that I found could be because the three books in the series have been piled together into one big paperback, or it could be because it feels like the games will never end. What readers will keep coming back for is quite simple: Julian. The way that he bounces between psycho and sweet is almost too difficult to resist. While there are other elements of the book that will keep a reader's attention, like some of the twists and turns in the games, nothing quite measures up to what Julian brings to the series. His darkness makes him appealing and his love for Jenny will keep readers interested. I didn't love this series, but I didn't hate it. What I will say is that it is not my favourite series by L.J. Smith, but it has something to offer.
Posted by Book Junkies at 10:22 PM