For all of those Kelley Armstrong fans who haven't heard the latest, you my friends are in for something pretty wicked awesome. Kelley is teaming up with Brett Booth and Dabel/Dynamitein creating a special series of the Otherworld in graphic form.
So far, pretty good right? Well it gets better. On top of the Forbidden Graphic Novel which is in the works - it will follow Clay and Elena after Frostbitten - entitled Forbidden, she is releasing a look into the Otherworld. The Graphic Novel will feature Savannah taking the reader through the Otherworld; this includes characters, history's etc. The only catch is that the graphic is only being released on a limited basis. That means there will only be 2,500 copies produced and sold. Kelley is being extremely fair by giving her readers a heads up. Otherworld Primer is in black and white and can be purchased through Dabel/Dynamite website. There is also a contest going on with the release of Otherworld Primer. Every one who purchases a copy will be entered into a contest which houses 3 prizes.

All information can be found on Kelley's message board or from Kelley's twitter page.
Here's a sneak peak at the cover art for the Otherworld Primer 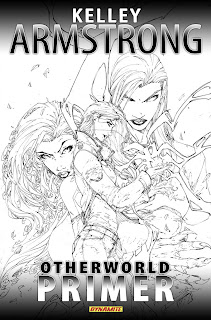